Whew! Seventy-five books for both the Golden Age and Silver Age Vintage Cover Scavenger Hunt, plus accidentally reading two extra golden age ones when I messed up my card, causing me to read the same category twice.

Commander George Gideon and his entire Scotland Yard staff of detectives, or most of them, investigate sabotage at London power plants, a furniture company fire, and a child abuser/rapist/killer. The first two turn out to be related as Gideon seemingly deals less with the politics involved, and his inner turmoil, as opposed to others in this series.

Although Gideon jumps at his conclusions fairly quickly and wraps up major conspiracies against the U.K. in 160 pages, still this is a rather suspenseful and entertaining mystery, though from an administrative angle throughout.

And that finishes the Vintage Cover Scavenger Hunt and 2017.

A Russian scientist, Vassily Kopeck (Kopeck=Farthing, get it?) disappears after being at a Victorian reenactment house. Much clamor ensues. Campion becomes involved because he is now all about the secret service and other stuff happens. Bleah.

What the heck. If an author was running on fumes anyway, let her die and don’t try and keep going a series that has no inspiration or cleverness left. Here Margery Allingham’s husband, Youngman Carter, tries to prove that he has talent, too. No, he does not. A convoluted mess that starts off fairly well, but just bogs down and goes nowhere. Poor Campion. You deserved better than this. No suspense and the only mystery is why bother. 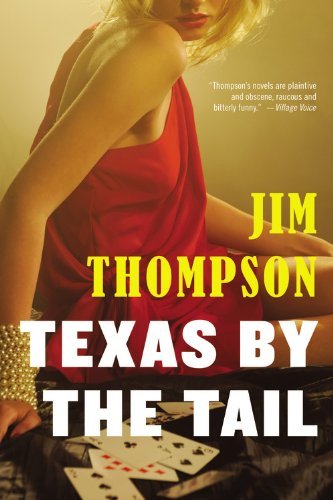 A gambler and his woman are running low on their funds, though she isn’t fully aware of the situation. This shortage is due partly to the blackmail that his secret wife is forcing him to pay. The gambler is afraid the woman, whom he really loves, will leave him if he finds out the lies he has been telling her. Of course, his whole lifestyle is built around lying and cheating. Various schemes and failures occur as we look at their life and what brought them to this point.

There isn’t a strong plot here, or a big climax payoff scene, but more a character study and a look at the gambler/conman lifestyle. The main character, Mitch Corley, is very sympathetic and you root for him, despite all the shady actions. Thompson also looks at Texas itself and the role it plays in this sort of person. The gambler plays craps, rather than cards, so the cover image is not representative of the book, though it does fulfill one of my last categories. This may not be Thompson’s best work, but it is still an engrossing read, and a good change of pace from all the British/European police mysteries that I’ve left to last this year. 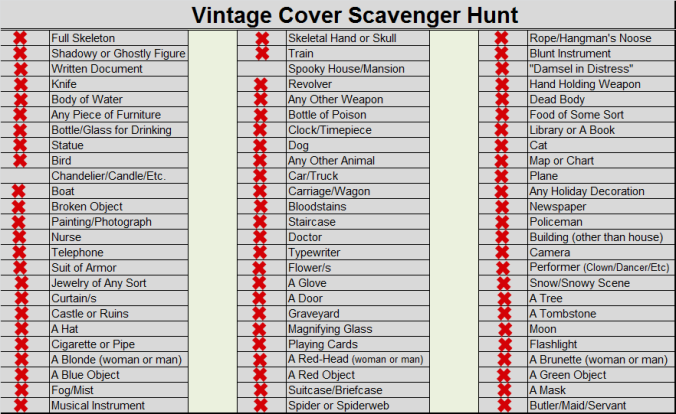 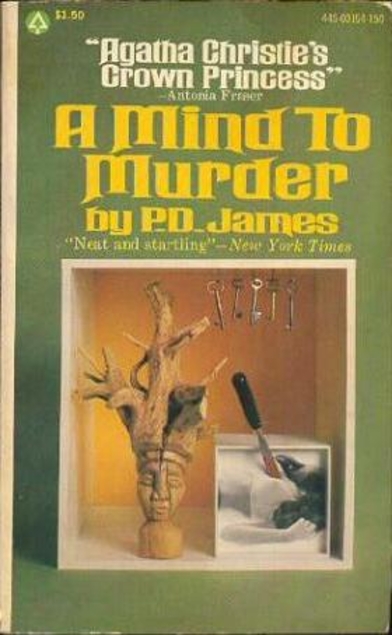 The cold and officious administrator of a London psychiatric clinic is murdered in the medical records room. Only the staff of the clinic had the opportunity to commit the murder and Superintendent Adam Dalgleish of Scotland Yard must sort through their characters and their motives to find the killer.

The murder happens fairly quickly in this one, so there is much more focus on the investigation and on Dalgleish than there was in the first one of this series, Cover Her Face. The ending is a surprising switch, but not terribly clever. Dalgleish’s morose and self-critical character is the draw, I suppose, as is the other well-rounded characters. I guess I’ll have to keep reading these.

A Swedish business tycoon is murdered by an unidentified man during a corporate dinner at a restaurant in Malmö. No one recognized him and, although various motives could be found among the corporate underlings attending the dinner, no connections are found indicating guilt. Martin Beck is called in from Stockholm to assist the local police in their investigation.

This is an interesting look at a police investigation and at Sweden in the late 1960s. The reader is not challenged to unravel the mystery, as the killer is not even a character in the novel until he becomes the prime suspect. Rather, this is a character study of various police officers who are struggling with, against, and for their jobs and their calling. Beck is identified by the cover marketeers as the detective, but he is just one of several featured here. It is not terribly fast moving, but it is very well done.

These thirteen short stories, originally published in 1968 and 1969 in Swank magazine, feature Wolf Lannihan, insurance investigator, as he looks into various crimes for which insurance companies are on the hook. Being in Swank, Wolf manages to hook up in most of the stories, regardless of the innocence or guilt of his “friend.” The stories are well written, with sufficient tough guy stuff and humor, and fast moving enough to fit with a dozen to two dozen pages. I’d never read anything by Lawrence Sanders before, but would be willing to do so if the pacing was similar.

ishouldbereading
Create a free website or blog at WordPress.com.