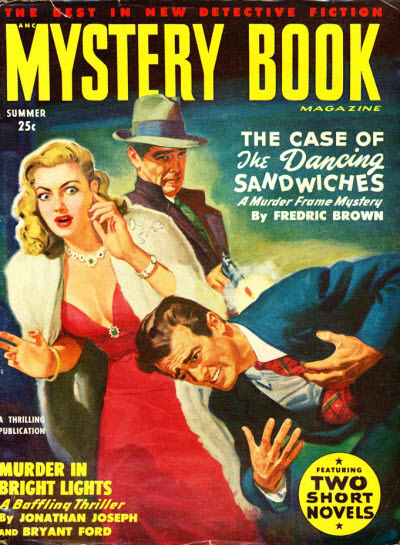 Fredric Brown’s “The Case of the Dancing Sandwiches” anchors this issue of Mystery Book Magazine with short stories by John D. MacDonald and D.L. Champion among others. Brown’s story involves a detective trying to clear a man of murder whose story is related to a New Jersey nightclub that nobody can prove exists. It isn’t as clever as many of Brown’s stories, nor does it have a great setting, but still entertaining. MacDonald’s story “Dead on the Pin” is a bowling-related crime story.

Perhaps the best story here is “Murder in Bright Lights” by Jonathan Joseph and Bryant Ford, two writers with whom I was not familiar. Neither seems to have written much else. This short novel is set on Broadway, with a domineering actor-producer-director slain just after opening night.