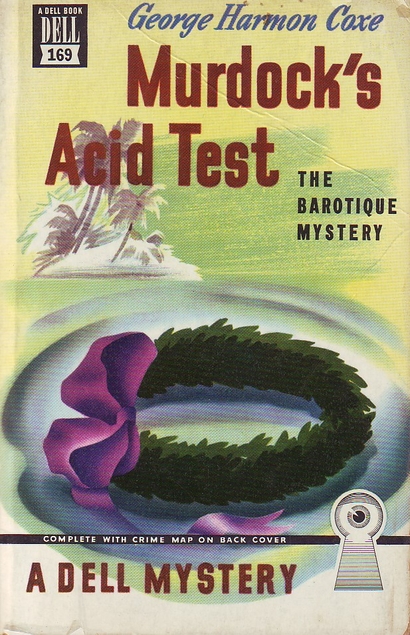 Kent Murdock and his newlywed wife Joyce are off on their honeymoon to the Caribbean, where they have been invited to stay on the remote island “resort” belong to the father of Joyce’s college friend. Also staying at the cabins on the island are an assortment of families, including a fugitive mobster, a plantation owner and his brother, a restless wife, and various other girlfriends, nieces, nephews, sons, and thugs. There are no actual resort activities other than drinking, it seems. When the plantation owner is bumped off, Kent is nominated as the investigator due to their isolation from police forces and due to his limited experience as a crime photographer for his Boston newspaper. Kent has to prove himself, hence his Acid Test, and rush the investigation along in order to get back to his newspaper where he has been called back urgently from his honeymoon.

There are quite a few similar characters here, so the character guide at the front of this Dell Mapback edition was necessary. From having read so many of the later books in this series, Murdock seems much more a post-war, 1950s character to me than a mid-1930s one. The atmosphere in the first few chapters reminded me of a 1930s B-movie set in a tropical location. The casual racism, especially of the island owner who inadvertently has to host a person of color as a paying resident, is difficult for a modern reader, though typical of its time. The Joyce character, who later completely disappears from this series, has little to do here, despite being prominently featured in the preceding book in this series. Overall, this is an adequate mystery, but by no means the best of Coxe’s works.